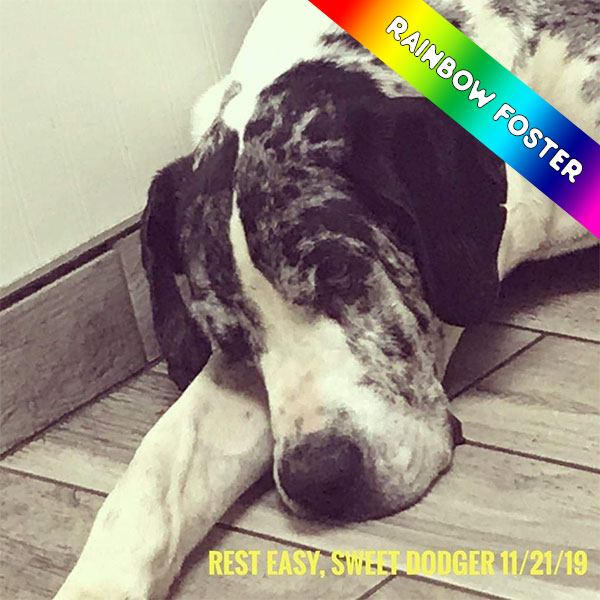 It is with the heaviest of hearts that I report that we have lost Dodger. Dodger was not only failed by his owner who surrendered him to the shelter, apparently howling, laughing and mocking this poor soul as he was turning him in, but ultimately, he was failed by the animal care service agency that is supposed to be in place to protect and advocate for these dogs. Downey Animal Shelter REFUSED to release him to his adopter because of a mistake on their end, even though he had reportedly been turned in for having a “twisted stomach.” Per the shelter, their vet assessed and examined Dodger and determined that he was fine and stable for neuter and they would UNDER NO CIRCUMSTANCES release him, even on a waiver. Wellll, how skilled is their vet that less than 72 hours later, this poor boy couldn’t even walk, was having respiratory issues and the shelter called the adopter to tell her that he needed out ASAP and was being released on a waiver?!?!?!?! 🤬 The adopter knew that his best chance would be with a rescue who could do whatever it took to get this boy properly vetted and evaluated. Dodger was surrendered to us on Friday evening, first thing Saturday he was at the vet. They did not seem overly alarmed about his condition, but felt that it would be beneficial to start him on anti-inflammatories and antibiotics for his leg. The plan was to do further radiographs once he was more stable, in less pain and preferably while anesthetized for his neuter. Well, last night, before I was even home from a 10 hour transport to pick up ANOTHER sick shelter dog, I got a call that he was pretty much unresponsive. We immediately rushed him to urgent care where diagnostics and labs were performed and multiple issues were identified. He had pneumonia, he had an enlarged heart, he had a peritoneal effusion, kidney stones, elevated liver function studies and he was severely fecally impacted. He was given IV fluids, IV antibiotics, a buprenorphine injection for pain and an enema and he was sent home around 2:30 in the morning. (Cont’d below in comments.) This morning, we were back at the vet to get him hospitalized and treated and the vet said that he’s “been practicing for 45 years but there was nothing he could do for Dogder.” He was too sick and too broken and the most Humane thing to do was euthanasia. Words cannot even begin to describe my feelings of anger and disgust at the organization that failed him! THIS COULD HAVE HAD A DIFFERENT OUTCOME! WE NEED TO DO BETTER TO ADVOCATE FOR OUR ANIMALS!!!!! This is the SECOND time in the last 6 months that an LA COUNTY SHELTER is responsible for the death of a magnificent animal. I repeat… WE CAN DO BETTER THAN THIS!!! Dodger, sweet boy, may you rest easy and run pain free, I know that the life that you are enjoying now is so much better than the misery this world held for you. YOUR LIFE MATTERED… YOU WERE LOVED. ❤